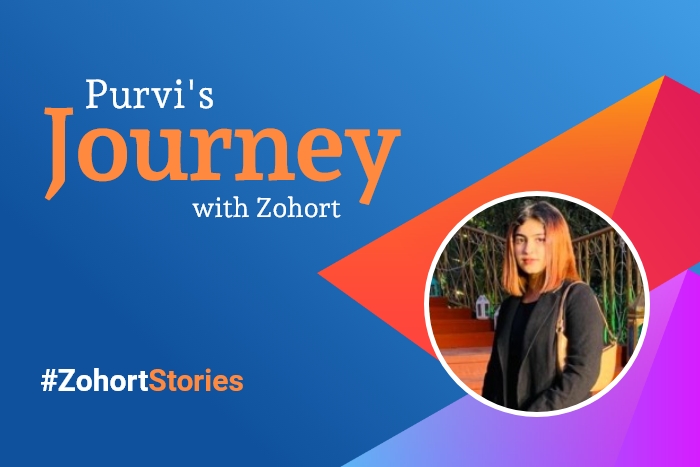 Hello, readers! Today we have another Zohort story for you.

Before the experience and the journey, let us dive into the details of what Zohort is. Zohort is a platform that provides a six weeks course for people who want to pursue their career in tech sales. SaaS is a growing industry, and to provide more impetus to its growth and simultaneously the growth of people’s careers, Zohort is here with this course.

Zohort graduates are given training by industry experts who are well-trained in this field. People from non-SaaS backgrounds who are new to this tech industry know a lot about the terminologies, which helped them to leap.

Now to have more insight into the Zohort platform, we have a story of one of the earliest graduates of Zohort, Purvi Dua, with Khushi Bhutani. Let’s have a look.

A brief introduction of Purvi Dua.

Purvi Dua has worked in ‘Avatar’ as SDR since February 2022. After graduating from University, this is her first job. She applied for Zohort while in the 5th semester of her graduation.

Things that Purvi likes and dislikes about being an SDR

Purvi said that she didn’t dislike anything about her role. The favorite part of her role is that she has to research the buyers before reaching out to them. She can use personalization while doing cold emails or cold-calling them. So, this research part is her favorite one.

People in the SaaS industry usually want people who already have one or two years of experience. Just after Purvi completed her graduation, she joined Zohort, which helped her gain clarity in the profile she wants to pursue her career and also understand the SaaS industry. She also learned about different terminologies related to the SaaS industry beforehand.

Reasons why Purvi chose to be an SDR at Avatar

Purvi believed in the product and the wonders they were doing in the 3D and augmented reality space. Because Metaverse is a buzzword and it’s the future, she wanted to be a part of something that will be there in the long run.

Purvi had more than two offers from Zohort in hand, Gurgaon and Bangalore based. She wanted to move out and be independent. So, this was one of the reasons for joining Avatar.

Purvi said that her experience with Zohort was amazing. Initially, it started with her not knowing anything and trying it out. Still, she eventually liked what she learned at Zohort,  from cold emailing to prospecting to cold calling and the general lessons Rahul sir gave.

Word of advice for freshers coming into this industry

“Don’t just sit at home and do nothing,” Purvi said.

Purvi started before her graduation was complete. So, it gave her a leap compared to her friends.

According to her, if you are a good listener and curious and want to learn anything and grow as a person, she believes that the SaaS industry and the SDR profile are for you. So, you have to get up and join Zohort.