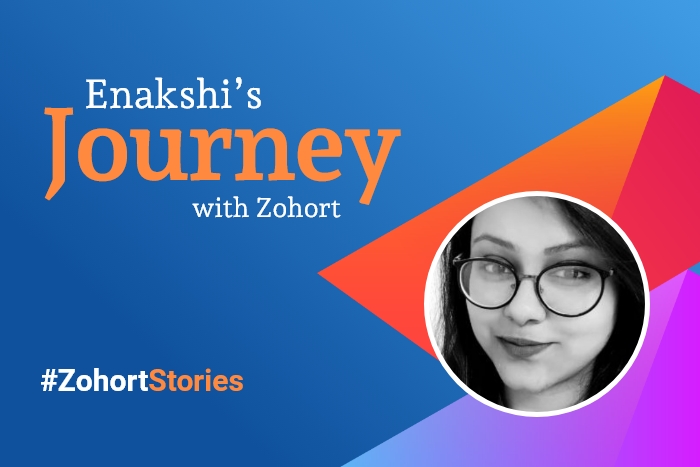 Hello, readers! Here is another Zohort story for you all.

Zohort is the nation’s first platform that helps people accelerate their sales careers and realize their true potential. They aim to provide best-in-class tech sales education while enabling tech companies with the most skilled talent pool in the market. Zohort provides a 6-week intense training program which industry experts do, and they train you on the fundamentals of B2B SaaS sales.

For another story of Zohort grads, we have Enakshi Saha. She is a complete fresher with zero background knowledge of the SaaS industry. After completing her MBA, she became a part of Zohort and worked as an SDR in iZooto. Let’s know more about Enakshi with Khushi Bhutani, Team Zohort.

A brief introduction of Enakshi

Enakshi is from Kolkata and finished her graduation from Calcutta University in 2017 with English honours.

Why did Enakshi come to the B2B SaaS industry?

As part of the internship program offered by her college, she had the opportunity to work with Bajaj Finserv during her second year of her MBA. The position was solely a sales position, and the setting was B2C.

After completing the internship, she believed she had some B2B expertise and began looking for an internship in that field. At that point, she was introduced to an IT company in Hyderabad. She began working there as a Digital Marketing Intern, and it was around this time that she first encountered IT and SaaS companies. She considered going after it because she finds it interesting and thrilling.

When she was searching for B2B jobs on Linkedin, she came across Zohort. She then received a call from a Zohort executive who explained what Zohort is and how it assists graduates in transitioning into B2B. She then enrolled in the program, and it was a very smooth and fast process, says Enakshi. She was the first in her batch to get placed through Zohort.

Benefits of being an SDR

The best benefit is this industry is it pays you well. Says Enakshi.

If you work well or hit your quota or overachieve it, there are no limitations, and it is very exciting when you work hard.

One thing that Enakshi like and dislike about this profile

She likes it when she gets a reply to the mail that she had sent to a prospect four to five times.

The one thing she dislikes about this profile is that, being an SDR, she has to do cold calls and sometimes encounters rude and unruly people.

She was working for the Indian region. She uses LinkedIn and Whatsapp, normal texts, phone calls, and emails.

Zohort has prepared her for daily tasks like emailing, calling, and LinkedIn. Zohort taught her everything from scratch with its rigorous program, including best guidance, assignments, live sessions, etc. Zohort made her ready for the industry.

As Sales experts say,  rejection is a part of our daily routine or daily job work, and you have to accept that.

In this job profile, you have to call ten people, but not all of them are ready for the demo; only one or two people are ready for the call, and there will be weeks where you feel like you have reached out to almost every prospect but not been able to book a single demo, so that is kind of demotivating. Still, you have to be consistent and focused.